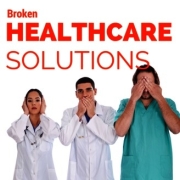 Listen to my podcast – on iTunes 0r Stitcher or Libsyn

The news is peppered with Obamacare stories, mixed messages, broken promises and a whole bunch of uncertainty. Allow me to share some local stories and first hand experiences on how the health care overhaul is affecting doctors offices, hospitals and patients right here in southern Arizona.

Outpatient Surgery Saves Medicare $500 million but who cares?    A friend of mine is a CEO of a company that has been in discussion with Medicare officials for over a year regarding making a slight increase in their company’s outpatient surgery procedure reimbursement.  Their analysis proved that shifting the expensive procedure out of hospitals and into surgery centers the Government could save over $500 million per year. After years of waiting and dozens of meetings last January Medicare made the change. Three months later, the Government rescinded their decisions after the hospitals saw the financial impact on their bottom line.  So is government run health care about patient care, financial cost benefit or who has the best lobbyist?

Die with dignity as long as the price is right.  There has been a steady increase in the use of hospice services in the US over the past decade. Everyone realized that moving terminally ill patients to comfortable settings staffed by people trained to handle the end of life care saved money and was the best for patient care.  In speaking with one of our region’s largest hospice providers I learned that hospitals are waiting longer to call in hospice services, many times sending patients a day or two before they passed. Why you ask? The answer is money, hospitals can earn more per day, especially off of Medicare patients,  by keeping a the beds filled with sick patients.

Doctor, accept Obamacare and get a 30% less per visit. Many of the big name insurance companies are marketing new plans under new names for Obamacare.  Last week our practice received a letter congratulating us that we could now start servicing our patients with the new Obamacare qualified plans. The only catch is that our pay per visit is between 20% and 30% less for the same visits on non-Obamacare private plans. If you want to know why the ‘You Can Keep Your Doctor’ promise got broken, look no further.  What business today do you know that can take a 30% across the board cut for the same level of service?

Medicare where all the money goes. According to a 2012 Urban Institute study, a working couple pays in to Medicare $122,000 over their working life. They take out $387,000.  No matter how you slice it the numbers don’t work.  With baby are boomers rolling into a period where their healthcare utilization will be the highest, expect some major bills racking up in America. What can we do to balance the equation? The most likely scenario is to restrict care, but since senior vote more than the working Americans, don’t expect that to happen any time soon.  We could raise payroll taxes and take more out of working Americans paychecks. With lower paying jobs and pressures from everything including grocery bills, student loans, state and local taxes that would be a tough blow to the overall economy. The third option it to keep putting the short fall on the credit card in the form of national debt, how long can that keep going on?

The poor hospitals need bailed out. TMC invested over $250 million over the last few years including a new orthopedic surgery center. Northwest Hospital just spent $50 million into a new state of the art surgery center.  The Pima County taxpayers have handed over Kino Hospital to University Medical Center along with $125 million over 6 years and another $30 million last year and $15 million a year forever. If things are so tough for hospitals why are they spending so much in major capital improvements?  Does a town like Tucson need three or four hospitals with cardiology departments, or orthopedic surgery centers? How about some specialization within medical categories? Hospitals are buying up doctors to gain control of each aspect of the health care dollar.  We are going back to the late 1980’s and 1990’s and the old HMO’s. If you remember those HMO days with $5 co-pays and doctors as gatekeepers restricting care.  Why didn’t the HMO’s take off? If you remember, patients rejected the lack of choice and doctors rejected not being able to care for their patients at the level they believed was needed.  The $5 co-pay has been replaced by the $4000 deductible and the insurance companies have been replaced by the hospital networks but how is this any different?

Look no further than the VA to see what our country is in for under Obamacare.  Four years ago, after veterans care scandals at Walter Reed Hospital,  Congress and President Obama authorized $300 million in funding for a new computer system and 3300 new employees. Even with money, staffing and the full force of government, the VA acknowledges that there are slightly more than 800,000 pending claims clogging its 58 regional offices with an average wait time of 273 days before a claim is processed. The HealthCare.gov web site, originally budgeted at $80 million was a huge fiasco and now topping over $1 billion is supposedly fixed.  Welcome to centralized planning and government control of healthcare.  We’ve seen 38 different delays in the roll out of Obamacare. Some due to confusion, some due to regulatory uncertainty and most politically motivated. Technocrats will never be able to fix something as complex as healthcare. Competition and free market principals got our country this far, why would we expect to take 19% of our economy and hand it over to politicians and bureaucrats and hope for a better outcome.  Just putting in more tax dollars hasn’t worked for k-12 education, college student loans or home ownership, why on earth would it work in healthcare?  From this article forward, every time you hear Healthcare Insurance Company, think utility.  Health insurers like United, Cigna, Aetna made a deal with the Federal devil has ultimately caused their demise. Given the way this bill was pushed through with little debate they may not of had a choice. The Federal government is now deeply in control of the insurance industries profit margins, the Feds will subsidize their losses, the ACA is  mandating what to cover and what should be paid out to claims. It couldn’t happen to a better industry but their days are numbered, watch for the hospitals networks to take center stage and the insurance companies to cease to exist.

There are solutions to this issue but they involve telling special interest that the pot of money they have been pulling from is drying up. The solution involves putting patients and doctors back in control of health care.  One quick solution would have been to create heavily subsidized high risk pools to solve the pre-existing conditions problem One of the chief reasons for the Obamacare role out was to stop the ‘medical bankruptcy’ syndrome. Lifestyle choices like smoking or obesity should have a carrot and stick approach shifting others bad choices away from society and back on their own pocketbooks.