The Trump Campaign Tapping Is Getting Closer To The Ex President 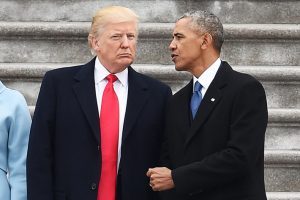 In a March 5, 2018, letter to House Intelligence Committee Chairman Devin Nunes, Adm. Rogers informed the committee that a two-page summary of the dossier — described as “the Christopher Steele information” — was “added” as an “appendix to the ICA draft,” and that consideration of that appendix was “part of the overall ICA review/approval process.”

His skepticism of the dossier may explain why the NSA parted company with other intelligence agencies and cast doubt on one of its crucial conclusions: that Vladimir Putin personally ordered a cyberattack on Hillary Clinton’s campaign to help Donald Trump win the White House.

Rogers has testified that while he was sure the Russians wanted to hurt Clinton, he wasn’t as confident as CIA and FBI officials that their actions were designed to help Trump, explaining that such as assessment “didn’t have the same level of sourcing and the same level of multiple sources.”

…..Except that the ICA did not reflect the consensus of the intelligence community. Clapper  broke with tradition and decided not to put the assessment out to all 17 U.S. intelligence agencies for review. Instead, he limited input to a couple dozen chosen analysts from just three agencies — the CIA, NSA and FBI. Agencies with relevant expertise on Russia, such as the Department of Homeland Security, Defense Intelligence Agency and the State Department’s intelligence bureau, were excluded from the process.

…… Less than a month after Trump won the election, Obama directed Brennan to conduct a review of all intelligence relating to Russian involvement in the 2016 election and produce a single, comprehensive assessment. Obama was briefed on the findings, along with President-elect Trump, in early January.

“Brennan put some of the dossier material into the PDB [presidential daily briefing] for Obama and described it as coming from a ‘credible source,’ which is how they viewed Steele,” said the source familiar with the House investigation. “But they never corroborated his sources.”