I caught a lecture on a podcast I enjoy from The London School of Economics. The author of The Man Who Knew: the life and times of Alan Greenspan. The lecture and book is a fascinating discussion on the role of central banking in the world economy.  Give it a listen HERE.  From the lecture notes:

Drawing on five years of untrammelled access to Greenspan, his papers, and his professional and personal intimates, Sebastian Mallaby has written the definitive study of the preeminent financial statesman of the post-war era. Reckoning both with Greenspan’s monetary decisions and with his approach to financial regulation, Mallaby grapples with the central mystery that Greenspan’s life presents to us. Why did a man so universally celebrated forge a financial system that proved so fatally unstable? And how will his successors protect us from a future crash? 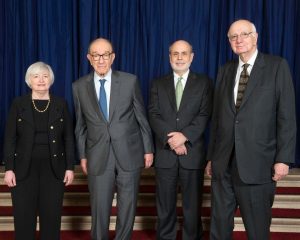 Mallaby spent 5 years researching and writing his book. He details Greenspan, the man who was a close friend of Ann Rand and editor on the libertarian manifesto, Atlas Shrugged.  Mallaby chronicles  the missing Greenspan doctoral thesis from 1958.on the role of central banks on asset bubbles which was discovered 40 years after it was written in a basement of an Ann Rand fan. He cut his teeth in politics under the messy presidency of Richard Nixon and he rose to become the Maestro of the Federal Reserve.  Greenspan understood power. He knew how to place a well timed leak and for 18 years as Fed chairman and 3 years as Ford’s economic advisor  he presided over the largest economy in the world. Through Presidents and booms and busts Greenspan had his finger on the key metric that kept America on top of the global mountain, he controlled  the Fed Funds Rate.  Wall Street managed to the ‘Greenspan Put’ and got comfortable taking ever greater risks because Uncle Alan had their back.

What I learned from the lecture (and I highly recommend spending time at the Q&A section about mid way through) was that Greenspan to Bernancke and now Janet Yellon to  Geitner/Paulson (in the Administration) have implemented a 30 year school of thought that bubbles happen and Central Bankers are the remedy. From the Dutch Tulip Mania in 1637 to the 1929 and 1987 stock crashes, the Dot Com bubbles and culminating with the housing crash of 2008, markets get frothy and assets move to inefficient industries.  The recession/depression and the bust are natural parts of an economic system. The downturn purges out the inefficiencies and capital moves to efficient markets. But what if the inefficiencies are actually created by the very remedy that is being used to fix the inefficiency?

Greenspan had the fortune of presiding over an economy that was experiencing a massive expansion lead by a baby boom, the advent of 401k legislation and an American centrist world fueled by the Petro Dollar. He was hailed as a genius. I remember reading about his technique of hours in the bath tub studying obscure data points like the number of light duty moving trucks sold in a given period.

As bubbles got bigger, the Feds ability to manage the corrections turned out to be more and more difficult. If you aren’t interested in the role of central banking in a capitalistic economy, I don’t blame you. Understanding the nuances of how a group of regional Federal Bank Governors impact your life takes some research.  For beginners, watch the Big Short. The movie breaks down, in laymen’s terms, how interest rates, regulators, rating agencies and greed fuel bubbles. It’s a historic look at the housing lead crash that almost took down the world economy. What’s scary is, we haven’t learned out lesson. Too big to fail banks are bigger than ever. An attempt to reign in banking via Dodds Frank has only made it harder for smaller, regional banks to compete. The Federal government has doubled it’s debt in 8 years from $10 trillion to $20 trillion. Interest rates have been held at artificially low rates although the economy has ‘recovered’.  (I referenced these and other issues in a recent Green Valley News editorial) The Federal Reserve has expanded it’s balance sheet from $875b pre crash to $4.4 trillion post crash.  Basically, from deficit spending at the federal level to injection of liquidity from the Federal Reserve we’ve added almost $15 trillion into the capitalist system from thin air. The run up and debt without consequences have proved fatal to prior civilizations. From the fall of the Roman Empire to the fall of the British Empire, major civilizations at the top of the world have been decimated by growing too fast, expanding military too far, taxing too much and working too little. At the pace of our global expansion of debt I wonder if the only solution is a once in 5000 year event of a debt jubilee.

Dollar Collapse: The sense of panic is palpable, and not surprising given the troubles that beset pretty much every part of the global economy. Latin America’s biggest countries are in various kinds of crisis. Japan’s Abenomics policy is widely seen as a failure. Europe has both negative interest rates and deflation, which seems like a deadly combination. US manufacturing is contracting and corporate profits are shrinking. China’s slowdown has sparked the kind of labor unrest that terrifies its leaders.

When these massive amounts of capital get injected into the global economy in the form of debt watch for bad things to happen.  Savers are being discouraged from putting away for a rainy day. Consumption – consumption – consumption is the name of the game.  Derivatives that supposedly push off risk are sold and resold and resold. The size of the unregulated derivatives markets is estimated to be 10 times the entire world economic output or $1.2 quadrillian. With another shock to the system the entire global economy could start turning on itself. A bubble bursting in China could spark a global panic. The freezing of liquidity that almost took down the globe in 2008. Frontline did a series of stories on the inner workings of the housing meltdown. I highly recommend:

In the end, plan on more debt and banking to the rescue.  Entrepreneurs are no long celebrated and our nation has been consumed with reality TV, social media,  safe spaces, black lives matter, war on cops, rich against poor, old against young, black against white. Bread and circus, send in the lions!

New business formation has dropped below business closing for the first time in a generation.  The regulatory burden on a small bank, a small farm, a small business has gotten out of control. At one point in my career I owned three different business types (trash company, hair salons and real estate). I added up all the agencies that I was regulated by, filled a form out for and cut a check to in a year. It totaled 34 different governmental groups that had some say in how I conducted business. As a small firm, managing these burdens directly affects the bottom line. The risk – reward pendulum has swung to far towards the risk side.

The recent 2016 Presidential election of Trump is a repudiation of central planning and a political class that has gotten out of touch with average Americans.  Trump didn’t win on Republican or Conservative principals. Trump won because he spoke directly to the American voter. He railed against media in the bag for the elites, he railed against unfair trade practices and he told the voters of Michigan, Wisconsin, Pennsylvania and Florida that they were getting the shaft.

After years on the air, studying  politicians, some large patterns started to emerge.  Every once in a while a voice jumps through the focus grouped word smithing of modern politics. A voice that bucks the current way of thinking. When I catch one of these moments I find myself yelling at the computer/tv with an exclamation of FINALLY!  One of these moments came from Chuck Schumer post 2014 Democratic losses in the mid term.  From the National Press Club, the 2nd ranking Senator in the US and with the retirement of Harry Reid, Chuck is set to be the highest ranking Democrat in the United States.  In the hour speech Schumer Schumer gave a preview of the rise of Trump. “People lost faith of governments ability to work, and then blamed the incumbent party, the Democrats, for the inability to act”. Genius, if he can get his party to move to these ideas we will see the Democrats back in power within a few election cycles.  Unless Trump can drain the swamp watch for a short lived time in power.

Speaking of Chuck, fast forward to 2016 and the Democratic convention. Chuck was riding high with all the polls pointing to a Hillary victory:

These liberals were borderline delusional — a delusion evinced by Chuck Schumer, the establishment senator from New York who was hoping to become majority leader, but has had to settle for minority leadership. “We’re going to have a Democratic generation. [President Obama] helped create it. But it’s just where America’s moving demographically, ideologically and in every way,” said the senator in an interview with Politico Magazine during the Democratic National Convention last summer. In July, Schumer made another rosy prediction at a forum hosted by the Washington Post: “For every blue-collar Democrat we lose in western Pennsylvania, we will pick up two moderate Republicans in the suburbs in Philadelphia, and you can repeat that in Ohio and Illinois and Wisconsin.”

As we know know, Wisconsin and Ohio went to Trump. Arizona, which was supposed to be in play had a 85,000 vote margin to Trump. In a shocker, Hillary only won bright blue Minnesota by 40,000.

For another perspective on the Fed and the ways our financial system is manipulated the following interview from Rich Dad Poor Dads, Robert and Kim Kiyosaki talk with Ron Paul and Fed Insider and author of Fed Up – Danielle DeMartino

Ready To Lose Some Weight? – Here’s HowCouple Lectures Worth A Watch
Scroll to top