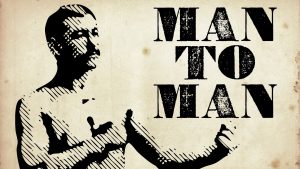 1. Every Man Has a Primary Battle

“Life is warfare . . . Then what can guide us? Only philosophy.”

As David Brooks noted in his fantastic podcast with Brett, every man has a primary battle or two in life. Dwight Eisenhower could be viciously angry, but found ways to deal with it. Jack London battled alcoholism, and while it ultimately contributed to his death, he battled through it, and lived a remarkably productive life. It’s quite possible that Marcus Aurelius feared death (not just his, but for his loved ones too) and had a short temper, and so he wrote himself these notes, repeating his themes over and over.

Let this be a lesson that while all humans face universal challenges, each of us has a primary struggle or two in life. Laziness, substance abuse, compulsive lying, over-eating, etc. It could also be things out of your control — the death of a spouse or child, an abusive family, job loss. Whatever your own personal context may be, it would serve you well to do like Marcus and write out meditations and exhortations to yourself as “moral reminders” — pithy ideas to keep you going in the midst of ongoing hardships and struggles.

2. Every Man Should Take Lessons from Everyone Around Him

“From my grandfather Verus I learned good morals and the government of my temper.

From the reputation and remembrance of my father, modesty and a manly character.

From my mother piety and beneficence . . .”

Our modern culture, however, has forgotten this ancient lesson. A moral failing by a modern business person, celebrity, politician, or even a company sparks internet outrage and calls for boycotts. Behaviors of historical figures now judged to be offensive, even if common to the time in which the men lived, are enough to write off all of their other admirable virtues and worthy accomplishments.

We don’t write ourselves off despite our flaws. Likewise, the wisest of men know that every person is a mosaic of virtue and vice, and that wisdom can be found in everyone, if only you’re willing to look.

3. Fate Plays a Role in Every Man’s Life — You Can Either Fight It or Accept It

“To the gods I am indebted for having good grandfathers, good parents, a good sister, good teachers, good associates, good kinsmen and friends, nearly everything good.”

“For all these [blessings in my life] require the help of the gods and fortune.”

As Isaac Lidsky has said, accept that life is a game of poker. While there are certain things you can do to increase your odds of winning, a large part of each hand is completely out of your control. Would you fight the cards dealt in a given hand, arguing that it’s not fair or that you want a re-shuffle? Of course not. While life is certainly higher stakes than poker, you just have to accept that what happens, happens. Even with death.

You can either double down and try to gain a greater grip of control (and lose much in the process), or you can know that whatever randomness and complexity life throws your way can be an opportunity to learn, grow, and build your resilience, even if the hand you’ve been dealt is pretty crappy. Sometimes even a 7-2 — statistically the worst starting hand in poker — wins out every once in a while.

4. A Man is Not to Be Consumed by the Actions and Attitudes of Others

“When you wake up in the morning, tell yourself: The people I deal with today will be meddling, ungrateful, arrogant, dishonest, jealous and surly. . . . none of them can hurt me.”

“Don’t waste the rest of your time here worrying about other people . . . It will keep you from doing anything useful.”

“Why do you not rather act than complain?”

How much of your day is spent complaining — either out loud or silently — about the actions of others? The driver who cut you off. The slow barista. Our deadlocked government. Your crank boss. How much of your energy and time is wasted thinking and stewing about those things?

As Aurelius wisely notes, you cannot be harmed or hurt by any of these people unless you allow it. Your life is wasted in choosing to be guided by the thoughts and actions of others.

We aren’t in control of the events that play out around us. But we are in control of our own attitude and responses to those events. It’s really that simple.

Viktor Frankl clung to this idea when he was imprisoned at both Auschwitz and Dachau during the Holocaust. He said: “The one thing you can’t take away from me is the way I choose to respond to what you do to me. The last of one’s freedoms is to choose one’s attitude in any given circumstance.”

5. Strenuous Action is the Answer

“When thou hast trouble in getting up, say to thyself: I awake to do the work of a man; why then should I grieve for having to do the things for which I was sent into the world? Was I born to remain warmly in bed under my covers? But it is so pleasant. Wert thou born for pleasure, then? Was it not for action, for work?”

“On the occasion of every act ask yourself . . . Will I regret it?”

“Why were you born? For pleasure? See if that answer will stand up to questioning.”

The catchphrase of The Strenuous Life is “Do Hard Things.” The point being that hard things — learning new skills, pushing yourself physically and mentally, serving others — is far more inherently fulfilling and satisfying than leading an easy, climate-controlled, smartphone-saturated lifestyle….

There is an immense pleasure to be found in partaking in the strenuous life. And because it’s earned, it’s a pleasure that’s far greater than what you’d find simply lying about. I assure you, a good meal and a good beer tastes far better when you’ve first hiked a few miles or lifted a few hundred pounds of iron.

“While you live, while it is in your power, be good.”

“Consider if you have behaved to all in such a way that this way be said of you: Never has he wronged a man in deed or word.”

“Look within. Within is the foundation of good, and it will ever bubble up, if you will ever dig.”

“No longer talk at all about the kind of man that a good man ought to be, but be such.”

s Aurelius advises, “inquire of yourself as soon as you wake from sleep.” Start every morning by getting in a mindset where you’re prepared to look for opportunities to serve and be useful. Benjamin Franklin practiced this, asking himself every morning “What good shall I do this day?” Then, at the end of the day, review your actions and inquire of yourself, as he did, “What good have I done today?” By bookending your day with a meditation on goodness, you will orient your soul more and more towards virtue.

Make your art that of being good. Do not simply think on it or talk about it; do good.