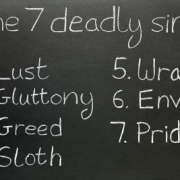 Michigan State University has settled hundreds of lawsuits filed against it by the survivors of Larry Nassar’s sexual assaults, according to multiple sources with knowledge.

The settlement will cost the school at least $500 million. Attorney Jamie White, who represented dozens of women who sued the university, confirmed the settlement. He said $425 million is to be paid now and $75 million will be held in reserve. White said this is a chance for the women to begin to move forward.

“I don’t think they can ever be made whole, but this is a step in the right direction,” he said.

The settlement will be formally announced Wednesday following two days of closed-door mediation sessions between lawyers for the university and the survivors. MSU is facing roughly 300 victims, according to figures in court records. Penn State University paid out $109 million to 35 victims in the Jerry Sandusky scandal.

With a $3b endowment, I guess it’s a cost of doing business. The taxpayers of Michigan and currently enrolled students will end up paying.

WaPo – The impact of the scandal on the university, which has about 39,000 undergraduate students, has been substantial, including the resignations of president Lou Anna Simon and athletic director Mark Hollis in January, and may extend beyond the financial. The settlement surpasses the more than $109 million paid by Penn State University to settle claims by at least 35 people who accused assistant football coach Jerry Sandusky of sexual abuse.

The money will have to come from some combination of insurance, state funding and student tuition revenue, said Thomas L. Harnisch, director of state relations and policy analysis for the American Association of State Colleges and Universities.

“They’ll likely have to use reserve funds and borrow money,” Harnisch said.

State funding covers about $280 million a year of the school’s overall budget of about $1.4 billion, according to Robert Kelchen, assistant professor of higher education at Seton Hall University, who also speculated Michigan State will need to take out loans to cover the settlement, as state lawmakers will likely balk at permitting public funds to be used, and the state limits how much colleges can raise tuition. Michigan State also could draw from its endowment, although much of that money is typically restricted.

“They may have to borrow some of the money, at a higher interest rate than before the scandal because their credit rating got lowered,” Kelchen said.

Higher-Education Enrollment Is On the Decline National Review

Why U.S. colleges and universities are worried about a drop in international student applications – WAPO

Long After Protests, Students Shun the University of Missouri – NYT

Students complaining of official inaction in the face of racial bigotry joined forces with a graduate student on a hunger strike. Within weeks, with the aid of the football team, they had forced the university system president and the campus chancellor to resign.

It was a moment of triumph for the protesting students. But it has been a disaster for the university.

Freshman enrollment at the Columbia campus, the system’s flagship, has fallen by more than 35 percent in the two years since.

The university administration acknowledges that the main reason is a backlash from the events of 2015, as the campus has been shunned by students and families put off by, depending on their viewpoint, a culture of racism or one where protesters run amok.

Before the protests, the university, fondly known as Mizzou, was experiencing steady growth and building new dormitories. Now, with budget cuts due to lost tuition and a decline in state funding, the university is temporarily closing seven dormitories and cutting more than 400 positions, including those of some nontenured faculty members, through layoffs and by leaving open jobs unfilled.

What’s The Cost-Benefit Of  A College Degree Today?

A friend of mine, Frank Antenori weighs in; 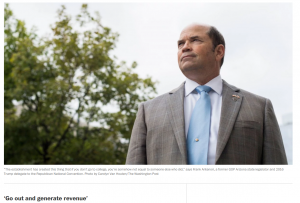 “The establishment has created this thing that if you don’t go to college, you’re somehow not equal to someone else who did,” Antenori said, sitting with his wife, Lesley, at the dining room table in their modest one-story ranch house.

Antenori said when he was in high school in the 1980s, students were directed toward college or vocational training depending on their abilities.

“The mind-set now is that everybody is going to be a doctor,” he said. “Instead of telling a kid whose art sucks, ‘You’re a crappy artist,’ they say, ‘Go follow your dream.’ ”

The Antenoris did not steer their two sons, 23 and 22, toward college, and neither went. One helps at home on the ranch, and the other is enlisted in the Army.

Antenori is just as happy his sons aren’t hanging out with the “weirdos” he reads about on Campus Reform, a conservative website with a network of college reporters whose stated mission is to expose “liberal bias and abuse on America’s campuses.”

The federal government spends $30 billion a year on Pell grants, which help lower-income students, including a large number of minorities, attend college. But studies show that half of Pell grant recipients drop out before earning a degree.

The overall college dropout rate is also high. Only 59 percent of students who start at four-year institutions graduate within six years, according to the National Center for Education Statistics. That leaves millions with debt but no degree.

More than 44 million Americans are paying off student loans, including a growing number of people over 60, according to the Federal Reserve. The average student loan debt of a 2016 college graduate was $37,000. At $1.4 trillion, U.S. student loan debt is now larger than credit card debt.

Antenori said taxpayers should help pay only for degrees, such as those in engineering, medicine or law, that lead directly to jobs. If a student wants to study art or get a “junky” degree in “diversity studies or culture studies,” they should go to a private school, he said.

And he said dropouts who have received government aid should pay it back: “That would be awesome,” he said, flashing a big smile.

“You want to create someone who’s going to be a contributor, not a moocher,” Antenori said. “Go out and generate revenue; that’s what it’s all about.”

The Loud Voice Of The Fringes – Arthur Brooks Leaves AEI

Lust Takes Down Another Politico – Gov. Greitens of Missouri
Scroll to top