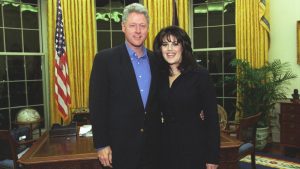 I hope you’ve stumbled upon the podcast series – Slow Burn.  It’s a series put out from Slate that digs deeply into historic events in a 7 0r 8 part long-form interview. The production and research value is impeccable. The first series was on Nixon and Watergate and the latest series is on Bill Clinton and Monica Lewinsky.

The series brings you back to the time of Bill Clinton and paints the picture of how lust overtook his life and almost toppled the Presidency.  Clearly, Clinton had ambition and a hunt for power but it was his inability to control the lust that haunted him from an early age. His charisma and pure ability to sway a room and a country propelled him to the highest position on earth, the US Presidency.  His lust almost took him down.

I remember the news articles and some of the details while they were happening but this in-depth, play by play showed me just how out of control Clinton really was. Should we care is the bigger question.  Kennedy was a known philanderer and he didn’t have the same scrutiny. His short 3-year term was focused on his policies and not his personal lives. Clinton hit the history books when the media was evolving into a 24 hour a day news cycle. The 1990’s were the beginning of the internet and America’s hunger for all types of stories.  Clinton was caught by the times he lived.

The leap from the independent investigation into Whitewater by Ken Starr to the Monica Lewinsky scandal and the blue dress and the definition of is ..is, has parallels with the Mueller investigation of Trump today.  The irony that a young and hungry attorney, Brett Kavanaugh served on the Starr investigative team is not lost on his Supreme Court confirmation hearings of today.

Give Slow Burn a shot, you won’t be sorry.

Find the series HERE or on you podcast feed of choice.

Rural America Dissapears – That’s A Sad EndingWhat Does The Smartest Man On Earth Think About?
Scroll to top