I first saw the Huka done by the University of Arizona Wildcats Football team. The UofA has always had a number of Samoan players and the tradition started. In 2015, based on some sort of complaint the program stopped doing the haka, only to have it come back in 2016.

For me, it’s primal. It’s warrior energy. The haka is intense! Looking at the commitment of the men doing the dance, watching their facial expressions and knowing the intention behind the dance is pure beauty.

Here’s New Zealand Rugby doing the haka,   another All Blacks

A farewell to a loved teacher – HERE

Jarom Hadley Nathaniel Rihari, 11.02.2000 – 29.06.2017. Haka ‘Tau Ka Tau’ done by Jarom’s brothers and friends. Their final send off to him as his hearse left the chapel. Their friend committed suicide and this is his send off.   Watch the pain in the leader with the blue shirt and tie. 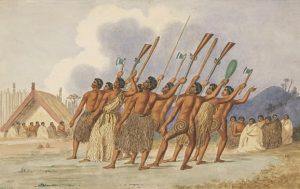 WIKI – – The haka (plural haka, in both Māori and English) is a traditional war cry, war dance, or challenge in Māori culture.[1] It is a posture dance performed by a group, with vigorous movements and stamping of the feet with rhythmically shouted accompaniment.[a]

War haka were originally performed by warriors before a battle, proclaiming their strength and prowess in order to intimidate the opposition, but haka are also performed to welcome distinguished guests, or to acknowledge great achievements, occasions or funerals, and kapa haka (performing arts) groups are very common in schools.[citation needed]

However, “According to Karetu (1993), the hakas have been “erroneously defined by generations of uninformed as ‘war dances’, the true ‘war dances’ are the whakatü waewae, the tütü ngärahu and the peruperu” (p. 37). Within Mäori culture, haka is the generic name for all types of dance or ceremonial performance that involve movement.”[2]

New Zealand sports teams’ practice of performing a haka before their international matches has made the haka more widely known around the world. This tradition began with the 1888–89 New Zealand Native football team tour and has been carried on by the New Zealand rugby union team (“All Blacks”) since 1905.[3]