Website here – or watch it with your Amazon Prime membership.

As the British Empire declined post WW2, London moved to create secrecy laws in 7 of it’s remaining colony remnant regions.  With banking secrecy laws in place, a series of trust, shell companies and other offshore entities, there are hundreds of unreported and hidden entities that popped up in the Caymans, Gibralter, Jersey. The goal, tax evasion, looting of countries by their elites and asset hiding.

The Panama Papers involved leaked documents detailing the web offshore banking. The firm at the source of the leak was the 7th largest firm structuring these deals for wealthy individuals, corporations or heads of states. 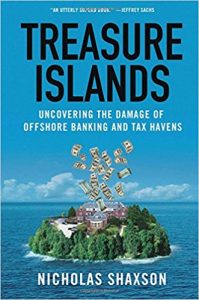 Amazon – With eye opening revelations, Treasure Islands exposes the culprits and its victims, and shows how:

*Over half of world trade is routed through tax havens

*The rampant practices that precipitated the latest financial crisis can be traced back to Wall Street’s offshoring practices
*For every dollar of aid we send to developing countries, ten dollars leave again by the backdoor
The offshore system sits much closer to home than the pristine tropical islands of the popular imagination. In fact, it all starts on a tiny island called Manhattan. In this fast paced narrative, TreasureIslands at last explains how the system works and how it’s contributing to our ever deepening economic divide.

In 2015, the Financial Secrecy Index named the most secretive states across the world. Due to low tax, tight secrecy laws, corporate transparency legislation and a lack of interest in creating public registries of beneficial ownership, the top five were named as Switzerland, Hong Kong, the U.S., Singapore and the Cayman Islands. Britain was placed at 15, and Panama 13.

Here is a rundown of the top ten big players:

Described by James S. Henry from the Tax Justice Network as “the grandfather of the world’s secretive tax havens,” Switzerland is a massively important player in the secrecy world today.

In September 2015, the Swiss Bankers’ Association reported that banks in Switzerland held the equivalent of $6.5 trillion in assets under management, of which it said 51 percent originated from abroad. This made Switzerland the world leader in global cross-border asset management, with a 28 percent share of the market.

The country has made some concessions recently to its iron-clad secrecy laws, under strong international pressure, but it has been a laggard relative to some other big players, like Luxembourg.

It has committed to the Organisation for Economic Co-operation and Development’s (OECD) global level Common Reporting Standard (CRS) of automatic information exchange, but it will only start implementing it in 2018.

Hong Kong is one of the world’s fastest growing tax havens today. Its fund management industry had $2.1 trillion under management in April 2015 and over $350 billion in private banking assets.

It has the second largest stock exchange in Asia after Tokyo, it ranks third after New York and London in equities and initial public offerings, and hosts a wide range of financial services players.

On paper, Hong Kong accounted for just under half of all foreign investment into China at the end of 2012.

It also has not signed the multilateral agreement to initiate automatic information exchange via the CRS. It has a problematic record on corporate transparency and—unlike European countries—it appears to have little appetite for country-by-country reporting or for creating registers of beneficial ownership.

China’s control over Hong Kong has shielded it from global transparency initiatives, and it still allows owners of bearer shares—vehicles for some of the world’s worst criminal activities—to remain unidentified.

The United States is more of a cause for concern than any other individual country, according to the Financial Secrecy Index, because of both the size of its offshore sector, and also its rather wayward attitude to international cooperation and reform.

The U.S. provides a wide array of secrecy and tax-free facilities for non-residents, both at a federal level and at the level of individual states.

Though the U.S. has been a pioneer in defending itself from foreign secrecy jurisdictions, aggressively taking on the Swiss banking establishment and setting up its technically quite strong Foreign Account Tax Compliance Act (FATCA), it provides little information in return to other countries, making it a formidable, harmful and irresponsible secrecy jurisdiction at both the federal and state levels.

According to the Boston Consulting Group in 2015, Singapore held around one eighth of the global stock of total offshore wealth, and an IMF report in 2014 estimated that over 95 percent of all commercial banks in Singapore are affiliates of foreign banks, a testament to its extreme dependence on foreign—and offshore—money.

The Singapore financial center is the region’s largest center for commodity trading, and in 2014 it overtook Tokyo to become Asia’s largest foreign exchange trading center, and the world’s third largest after London and New York.

It hosts substantial activity in insurance, in debt and equity capital markets, in derivatives, and in offshore companies and trusts. It is a major wealth management center, with $1.4 trillion in assets under management in 2013.

As a country, it poses many of the same threats that Hong Kong does—a lack of serious reforms to its corporate secrecy regime and a lack of interest in creating public registries of beneficial ownership.

With banking assets worth $1.4 trillion in June 2014, and hosting over 11,000 mutual and other funds with a net asset value of $2.1 trillion, the Cayman Islands makes the list.

Cayman retains many secrecy features—not least a law that can put people in jail not just for revealing confidential information, but merely for asking for it.

The whistleblowers who exposed the so-called “Luxleaks” scandal went on trial and while Luxembourg has taken action to improve its previously poor track record on providing offshore secrecy, it has continued to expand its role in helping multinational corporations to avoid paying tax in other countries.

It remains a center of lax financial regulation and yet it is one of the world’s most important financial centers.

It is the world’s second largest investment fund center after the United States—and fund management, with assets under management worth over $2.5 trillion, is the most important part of the financial center.

The Lebanese scattered population is estimated at anywhere between 5 million and 16 million-strong—larger than Lebanon’s total population of around four million.

Many members of the population are high-net worth individuals and include such world famous names as Carlos Slim, the Lebanese-Mexican telecoms tycoon who is the world’s richest man, Carlos Ghosn, the French-Lebanese-Brazilian boss of carmakers Renault and Nissan, and Nicholas Hayek, a Swiss-Lebanese who runs Swatch, the biggest maker of Swiss watches.

Lebanon’s political and military troubles over recent decades have disrupted the offshore financial sector, but it has proved astonishingly resilient.

Beirut’s offshore financial services sector has been growing at an average of nearly 12 percent per year since 2006, with banking deposits estimated at some $175 billion at the end of 2014.

While other offshore financial sectors have significantly curbed financial secrecy in recent years, Lebanon has sailed against the prevailing winds on global financial transparency.

Germany is a safe haven for dictators’ loot, the assets of organized crime networks, and the proceeds of tax crimes and other illicit financial flows from around the globe.

In his September 2015 book Tax Haven Germany, TJN researcher Markus Meinzer calculated that the amount of tax exempt interest-bearing assets held by non-residents in the German financial system ranged between €2.5 to €3 trillion as of August 2013.

While there has been some recent progress with Germany’s international treaty commitments and anti-money laundering framework, there are still major loopholes and many implementation deficits.

Germany has shown negligent enforcement of anti-money laundering rules, and it offers a worrisome set of secrecy facilities and instruments, such as bearer shares, which were outlawed or severely restricted long ago in many ‘classic’ tax havens.

Like many other OECD countries, Germany does not sufficiently exchange tax-related information, automatically or otherwise, with a multitude of other jurisdictions.

Many foreign-owned assets in Germany are held secretly through elaborate structures spanning secrecy jurisdictions such as Cayman Islands and Switzerland.

Lacking any major remaining oil reserves, Bahrain has made up for this in part by building up an offshore financial center.

Being an island in the Persian Gulf has influenced its history as a trading center, which in turn was a foundation upon which offshore finance has been built.

It is seen as an “island of hospitality” to banks and businesses, as author Geoffrey Jones put it. The financial sector today is the largest employer in Bahrain, contributing to over 25 percent of GDP and employing some 14,000 people.

Bahrain is one of the biggest global centers for Islamic finance, and hosts the largest concentration of Islamic finance institutions in the Middle East. This sector is growing fast, with total assets in the Islamic banking sector rising from $1.9 billion in 2000 to $25.4 billion by November 2014, out of total banking sector assets of $189 billion, according to the Central Bank of Bahrain.

Bahrain was named the world’s fastest growing financial center in 2008 by the City of London Corporation’s Global Financial Centres Index 2008.

There is no corporate income tax, personal income tax or capital gains tax in Bahrain, and Bahrain has quite a wide network of tax treaties with a number of developing countries.

Although the Dubai International Financial Centre (DIFC) describes itself as “an onshore financial center,” Dubai is unquestionably one of the world’s best known tax havens or secrecy jurisdictions.

It is built on a complex array of free trade zones, a low-tax environment and multiple secrecy facilities and lax enforcement. In addition, Dubai has a strong culture of an ask-no-questions, see-no-evil approach to commercial or financial regulation or foreign financial crimes.

It has consequently attracted large financial flows and some of the world’s most high-profile criminals. A significant slice of the inbound money comes in the form of cash or gold.

Like Switzerland, Dubai appears as an island of political and economic stability in a turbulent region.

As The Economist explained in 2013: “This role as a regional hub—and a policy of being open to almost any kind of business—explains why Dubai has been, at least economically, the main beneficiary of the Arab spring.

“Instability in the rest of the region has diverted capital, commerce and people to the emirate. When neighboring Saudi Arabia upped its social spending to pre-empt protests, for instance, much of the cash ended up in Dubai’s shopping malls. More important, the emirate has clearly established itself as the region’s safe haven.”

Historic Decline of Civilizations – A 5000 Year Story That Seems To Have...Pride – Power Corrupting The Highest Levels of American Government
Scroll to top