I’ve weighed in before on game-changing technologies that can change the global economic and social fabric.  Battery storage is one area, power generation is another. Here’s an update from Forbes about Lockheed Martin’s secret Skunk Works lab.

Try to get your mind around the potential changes that technology has brought to the world. From Guttenberg and the printing press to Zuckerberg and Facebook, technology is the great disruptor. Supply and demand and the role of scarcity in that equation can be completely disrupted by a new invention or an entrepreneur bringing a Big Hairy Audacious Goal to market.

This is a caption I use in my presentation to new staff members. We are in a time of transformation.

One day, I’m sure we’ll be living this scene from Back To The Future;

Lockheed Martin’s secretive Skunk Works® laboratory registered a patent in March for a revolutionary technology that could solve the world’s energy problems for good – but don’t pop the champagne yet. The design is for a compact fusion reactor (CFR) which theoretically produces cheap, clean, near limitless energy – all from a device that could fit on the back of a semi. If it sounds far-fetched, that’s because it is. The sustained generation of a fusion reaction has evaded scientists since the idea was first conceived over 70 years ago.

Lockheed Martin thinks they can change that. 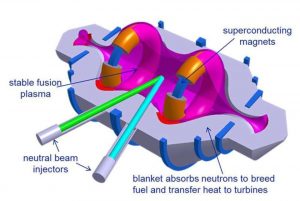 A controlled thermonuclear fusion reaction is the holy grail of energy technology. When two hydrogen atoms join together to form a single, heavier atom, a vast amount of energy is released. This process is the same that gives the sun its power. Think of a star as one massive fusion reactor.

No carbon emissions or radioactive waste are produced in the reaction, and ocean water is all the fuel you need for a hundred thousand years of operation. Oh, and a fusion reactor is incapable of melting down – when a fusion reaction fails it simply snuffs itself out.

The challenge with fusion lies in harnessing and controlling the unstable reaction.

Though the fusion process has been theorized since the early 1900s, research did not begin in earnest until the 1940’s when Soviet scientists unveiled their design for a Tokamak reactor – a device which uses strong magnetic fields to contain hot globs of plasma (around 540 million degrees Fahrenheit) generated from atomic fusion.

Purpose and Vision For Leading My OrganizationWhere Are You Living? The Physical Realm, Mental Realm or Spiritual Realm?
Scroll to top