One of the chapters on my 12 Arguments For The Decline of America, is the decline of religion.  In the work, I put forth a dozen arguments that point to a disappointing trend in America. I started working on the thesis in 2012 after five years of the daily analysis from my perch as a morning talk show host. Over and over, I’d read a bit of news or economic data and tell the listeners, ‘this doesn’t look good’.  I compiled these trends into 12 categories and started researching my theory.

With the decline of religion argument, I’m not advocating for a particular type of religion.  I’m a Catholic and committed. Modern-day scandals and historic failures and all, I appreciate the rituals, the formality, and the foundations. I’ve been able to separate the politics, which I’ve seen my share of in leadership positions within my faith.  I am smart enough to know that people are fallible and no matter what position they are in mistakes will happen.

In my argument faith arguments, I point out that spiritual connection and its role in Western society has been an important part of advancing our societies.  No matter if you worship in a Mosque or a Synagog, the very act of gathering together to realize that there is something bigger than our selves is an important part of a functioning society. Religion is most often followed by morality and personal accountability. Organized religion helps provide society with a roadmap and a sense that we are in this together.  The Golden Rule is the foundation of most organized religions and a pretty good way to live your life.

The decline of religion argument, coupled with the flight from an agriculture/rural-based society to service-based cities and the decline of the family unit all combined add up to a bad trend for America.  We’ve had a series of Great Awakenings in the past and I believe we are open for one right now. As we get lost in our social media, shut off from the world and disconnect from other people, an economic jolt could bring about another Great Awakening;

The First Great Awakening (sometimes Great Awakening) or the Evangelical Revival was a series of Christian revivals that swept Britain and its Thirteen Colonies between the 1730s and 1740s.

The Second Great Awakening was a Protestant religious revival during the early 19th century in the United States. The movement began around 1790, gained momentum by 1800 and, after 1820, membership rose rapidly among Baptist and Methodist congregations whose preachers led the movement.

The Third Great Awakening refers to a hypothetical historical period proposed by William G. McLoughlin that was marked by religious activism in American history and spans the late 1850s to the early 20th century. It affected pietistic Protestant denominations and had a strong element of social activism.

The Fourth Great Awakening was a Christian awakening that some scholars — most notably economic historian Robert Fogel — say took place in the United States in the late 1960s and early 1970s, while others look at the era following World War II.

We are social beings and wired to connect. As we drift apart we are going against thousands of years of evolution.  Check out my favorite lectures from Jonathan Haidt and Dr. Joseph Henrich on my SOCIETY Page for more background on evolutionary sociology.  Check out my RELIGION Page for a deeper dive into faith.

Trends suggest that organized religion is “on the wrong side of history.”

The latest research on worldwide trends shows that religious beliefs are deteriorating,” reports onenewsnow.com, adding that at the same time “those adhering to a secular belief system devoid of God are on the rise.”  Various recent studies have also shown that secularism—literally the separation of religion from government—is proliferating, a function of the decline of both church and state.  Churches all over the world are shutting down as more people lose their religion and, in its place, acquire a moral compass grounded in humanist values.  (Humanism is a philosophy that does not incorporate a divine entity or supernatural beliefs, and assigns people the responsibility of living ethical lives.)  Atheism and agnosticism are thus growing, so much so that in some countries (notably Great Britain and Norway), there are more non-believers than believers.

Even in the United States, a profoundly religious nation, more citizens are adopting secular humanism as their creed of choice.  About 80% of Americans have consistently claimed to be members of a particular religion, but that figure is gradually dropping due to a generational effect.  Baby boomers have turned out to be significantly less religious (but more spiritual) than their “greatest generation” parents, and millennials are showing signs of continuing this pattern.  As older churchgoers die off, houses of worship are having trouble filling their seats, with no great awakening on the horizon to reverse the drift.  In fact, it’s now atheists and agnostics who are increasingly banding together either online or at Meetups to share their beliefs (or lack thereof) with like-minded people.  Growing up in a predominantly Christian community may have been tough for the non-religious, but that is fast changing in America and elsewhere.

While in some areas of the world such as sub-Saharan Africa, religion (Christianity, to be specific) is gaining ground, that is more the exception than the rule.  With its 1.4 billion population, China is highly secular, a function of the Communist government’s successful efforts to steer people away from religion.  Secularization is also rising in nations with official state religions because of anti-government sentiment.  In the West, Islamophobia appears to be fueling what has been termed the New Atheism, as many come to see religion as a whole as more of a problem than anything else.  Both financial security and education are tied to secularization, making it not surprising that religion is on the wane in developing nations with a growing middle class.  The increase of women in the workplace and of households with fewer children also correlate with a decline in religious values, and the aging of the global population is likely another contributing factor.  The Internet too is promoting secularization by exposing people to alternative forms of spirituality and by allowing non-believers to connect.

Despite the growing numbers of Muslims in the world (Pew Research estimates that their numbers will increase from roughly 23% of the global population in 2010 to around 30% in 2050), it’s difficult to make the case that fundamental religion will play a greater role in most of our lives in the future.  Ever since the Renaissance, in fact, the philosophy of secular humanism has spread throughout much of the world, along with a growing faith in the promise of science versus religion.  (“Science and religion are incompatible because they have different methods for getting knowledge about reality,” Jerry A. Coyne wrote is his 2015 book Faith Versus Fact.)  A long view suggests that official forms of religion are, as the saying goes, “on the wrong side of history,” and that humanism will seed further secularization in the 21st century. 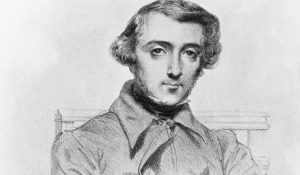 ….That’s the ground level of the crisis we’re facing. This is what we have to deal with to learn again that we are not merely individuals but are also relational beings, in need of the love and friendship of others. We’re not social in an abstract sense. We’re not about “relationships” but about relationships you can put a name to, as with family, friends, love, marriage, etc. Real people are the only real opposition to our twin temptations, to chase after change and success almost worshipfully — or to withdraw from society, in fear of humiliation or just exhausted by the uncertainty and the hustle and the hypocrisy.

Poulos deals with these subjects in his book — not just change, but also the role of money in our lives, sex, play, love and faith, and even death, the perpetually unconfessed object of our fear. He works hard to bridge the gap between the esoteric level of political philosophy, where Tocqueville is at home, and the level of pop culture, where we have stories about what troubles us, but never reflections that are honest and thoughtful. He shares our agonies and has also thought through them — and his book is a rare example of the benefits of a liberal-arts education. Humanistic study actually in service of our humanity!