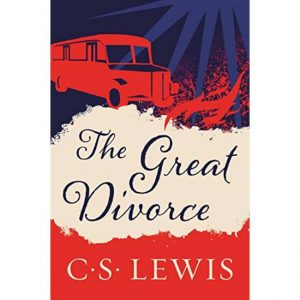 It is this change that English author C.S. Lewis so beautifully explains in his short story, The Great Divorce.

In the story, the hero explores heaven, purgatory, and hell, and meets a few of their respective occupants. During these wanderings, the hero encounters a downright pitiable man who is plagued by a gross lizard that clings onto his shoulder and whispers in his ear. The afflicted man is tired, sad, and frustrated. The lizard is sucking all the life out of him, and he wants it off so badly he’d be willing to undergo nearly anything if only he could knock the thing about a hundred miles away. He must get it off — or die in the attempt.

As the afflicted man thus stands and thinks about his misfortune, a brilliant angel appears and offers to save him. The angel offers to kill that lizard, and thereby free the poor man from his long-endured misery. Of course, the lizard immediately starts feverishly whispering all kinds of fears and doubts into the afflicted man’s ear. Frightened, the man makes the angel promise that, should he take the lizard off, the procedure would not kill him. The angel promises, and so moves to pry off the lizard. The man immediately recoils in terrible pain, shouting that this was far more difficult than he had ever expected, and that perhaps it would be better to pry off the lizard another day. Eventually, the angel persuades him, and the lizard is yanked off the sobbing man with such terrible force that he almost dies. Almost – for he revives a few moments later as a larger, more complete, and much more excellent version of himself.

This, implies Lewis, is the inevitable process of overcoming your fear of change.

It is not the change itself that you fear – it is the transition from Point A to Point B. That transition often appears so fearsome and daunting that the shift (however small) begins to seem deeply humiliating, senselessly painful, and nearly impossible. You become discouraged and afraid. In the meantime, you allow yourself to be lulled into complacency by the gentle whisperings of your own self-doubt. These whisperings are the lizard on your shoulder and should be firmly ignored.

No matter how hard your change is, remember that the reality of your fear is not coming from the change itself, but from the transition and how you approach it.

Will you approach your transitions with patience and courage, or will you allow yourself to be bogged down into inaction by your insecurities and fears?

More on The Great Divorce – HERE

Protected: US Military – The Police Force For The World – Book Notes – ‘Decline of America in 12 Chapters’ J Higgins