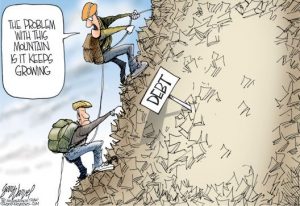 I’m a John Mauldin reader. His analysis is always deep, grounded in facts/data and he’s been in the financial world long enough to add a historical perspective to modern events. His series on the Great Reset (link below) is long but worth a read.

His recent article in Forbes explains where I think we are as a world economy. Since 2008 there has been a massive run-up in all sorts of debt. We never really took our medicine after the housing crash and instead inflated our way to a bigger potential issue.

The series of blog posts paint a picture of where we are as a State/County/City (pensions), Country ($21t in debt) and Globe (global debt to gdp is at 318%). There are ramifications for all the monetary policy. We can only speculate on the outcomes.

Forbes – Earlier this year, I wrote a series of articles (synopsis and links here) predicting a debt “train wreck” and eventual liquidation. I dubbed it “The Great Reset.” I estimated we have another year or two before the crisis becomes evident.

Now I’m having second thoughts. Recent events tell me the reckoning could be closer than I thought just a few months ago….

Notably, the combined debt of the US, Eurozone, Japan, and China has increased more than ten times as much as their combined GDP [growth] over the past year.

Yes, you read that right. In the last year, the world’s largest economies are generating debt 10X faster than economic growth. Adding debt at that pace, if it continues, will boost the debt-to-GDP ratio at an alarming rate….

I am trying to imagine a scenario where this ends in something less than chaos and crisis. The best I can conceive is a decade-long (and possibly more) stagnation while the debt gets liquidated.

But realistically, that won’t happen because debtors won’t let it. And they outnumber lenders. For this reason, something like “the Great Reset” will happen first.

The rational course would be to delay the inevitable as long as possible. Yet in the U.S. we’re rushing it.

I’m also reading a book, The Day After The Dollar Crashes, by Damon Vickers and although the run up and political theories that are nothing new took 3/4th of the book to get to the ‘what happens when that happens’ part, Vickers hypothesis is an either we go back to a money backed by a gold standard or we move to one currency.  He does mention that we need to be very careful about a potential wag the dog war to deflect from the pain.

The Great Reset
What Happened to Deleveraging?
Unfunded Liabilities
The Unthinkable Recession
How Should We Then Invest?
Introducing Mauldin Solutions Smart Core
Orlando and SIC

A couple of documentaries that help to paint a deeper picture of money and the future:

End Of The Road – How Money Became Worthless

The Nature Of Money