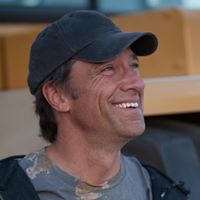 A couple years ago, when Angelina Jolie and Brad Pitt were getting divorced, Jolie was quoted as saying, “It never even crossed my mind that my son would need a father.”

I was struck by her comment, and I remember wondering how many other Americans might share her view. At the time, I didn’t think many. But today, I’m convinced the number is significant. I’m also amazed at how quickly fatherhood has fallen out of favor. Can you imagine a celebrity – or anyone for that matter – saying such a thing just twenty years ago?

This week’s episode of RTF is about a guy named Carlos who found an effective way to deprogram bullies. Please watch it. It’s a great story about a great guy making a real difference around a serious issue. It occurred to me though, half way through filming, that bullying – like so many other social ills in today’s headlines – isn’t really a problem at all; it’s a symptom. In my view, a symptom of a society that seems to value fatherhood less and less.

I know this is controversial, and I’m sorry to inject an uncomfortable element into a post about a “feel-good” show, but I think it’s important to consider the possibility that this thing we like to call “an epidemic of bullying,” is really an “epidemic of fatherlessness.” I also think it’s reasonable to conclude that our society is sending a message to men of all ages that is decidedly mixed.

Think about it. On the one hand, we’re telling them to “man-up” whenever the going gets tough. On the other, we’re condemning a climate of “toxic masculinity” at every turn. If that strikes you as confusing, imagine being a fourteen-year old boy with no father figure to help you make sense of it.

Anyway, the bullying crisis is real, but the root cause has nothing to do with video games, or guns, or social media, or rock and roll, or sugary drinks, or any of the other boogymen currently in fashion. Nor is it a function of some new chromosome unique to the current crop of kids coming of age. Kids are the same now as they were a hundred years ago – petulant, brave, arrogant, earnest, frightened, and cocksure. It’s the parents who have changed. It’s the parents who have put their own happiness above the best interests of their kids. It’s the parents who actually believe “the village” will raise their kids, when the village is profoundly incapable of doing anything of the sort.

Of course, I could be wrong. I often am. But I can tell you with certainty that whatever the root causes of bullying may be, Carlos Flores is part of the solution. Watch the video and see for yourself. And if you’d like to see more men like him, doing similar things in other places, do me a favor and share his story. It’s a good one. And imitation is also part of the solution…