‘Americans are Being Held Hostage and Terrorized by the Fringes’

An exit interview with the American Enterprise Institute’s Arthur Brooks. 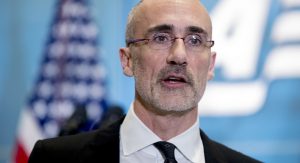 ……PM: But isn’t the problem more that the fringe used to be called “the fringe” for a reason—and today the fringe represents a broader chunk of both politicians and voters?

Brooks: They always do in this cycle. It’s always the case that when you get into a time of really big political polarization, that people are manipulated by people who are at the fringe. It’s only in retrospect that people go, “Whoa, man, I can’t believe it. I can’t believe that we were putting up with that.” We need a kind of an ethical populism. What basically happened is that political establishment was a little bit too reticent. It was not paying attention, and the result was that the fringe picked up the football and ran off with it. But there’s going to be a backlash. If I have anything to say about it, there’s going to be a backlash of people who say that your radical, hateful views, and I’m no liberal, but I don’t hate liberals. I refuse to hate liberals. Refuse. I think there’s a lot of Americans that want to join me in that.

PM: How do you think we got to this point?

Brooks: The two things to read are Reinhart and Rogoff’s book, This Time Is Different. It came out in 2010—the single best book ever on financial cycles and financial crisis. The second is an article that was written in the European Economic Review in early 2017 by three German economists that looks at the knock-on political effect of financial crises—not a regular recession, but a big overhang of assets that becomes a bubble and then pops, which typically happens a couple times a century. So it’s silver and the railroads in 1894 and 1896, or it’s the stock market in 1929, or it’s the real estate market in ’08. The most interesting thing for me is that in the decade after a financial crisis, the knock-on effect over 10 years is not low growth, it’s uneven growth. The big thing that happens for 10 years is that you have asymmetric economic growth where 80 percent of the income distribution gets none of the rewards of the growth after the recession. Of course you get populism after that. It’s natural. It’s just the way it works.

PM: But populism is not inherently a bad thing.

Brooks: Bernie Sanders is a populist. Bernie Sanders’ populism is all about scapegoating. It’s rich people, it’s bankers, it’s Republicans—it’s all these people who got your stuff. That’s the kind of populism that we frequently see as opposed to a kind of ethical populism, which basically says we have good values, let’s go share. Let’s make sure that our values are ascendant to save our country. Right? Wouldn’t that be great? But it turns out it’s easier in the political process when people are suffering a lot to say somebody came and got your stuff. Whether it’s immigrants or whether it’s trading partners or whether it’s bankers or whatever.